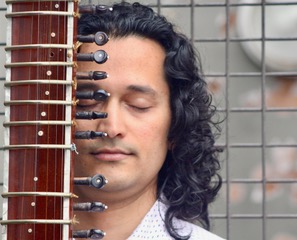 Kanada Narahari (Kanada Raghava) was born in Manchikeri, a small village in western ghats, Karnataka, India. His father Vidvan Narahari Keshava Bhat is a renowned Sanskrit scholar, poet and author of many works in Sanskrit on theatre plays and Yakshagaana, a form of traditional performing art. Therefore, it is not surprising that, young Kanada Narahari would have been exposed to Indian performing arts, music and literature at very tender age. When he was nine years old, he enrolled to study Carnatic classical vocal with Vidushi Shreedevi Aravind. After spending some years under Vidushiji, he began to develop an interest in Hindustani Classical music and was particularly attracted to the Sitar. This then began a new journey. At 22, he spent a few years under the sitarist Sanjeev Korti, and found solace at the feet of his teacher, sitar artist Abhik Mukherjee. Today he has evolved into highly accomplished sitar player having performed widely in India, Nepal, Africa and United States.