Another Round of Shifting Plans: Key Chorale, Sarasota, Florida 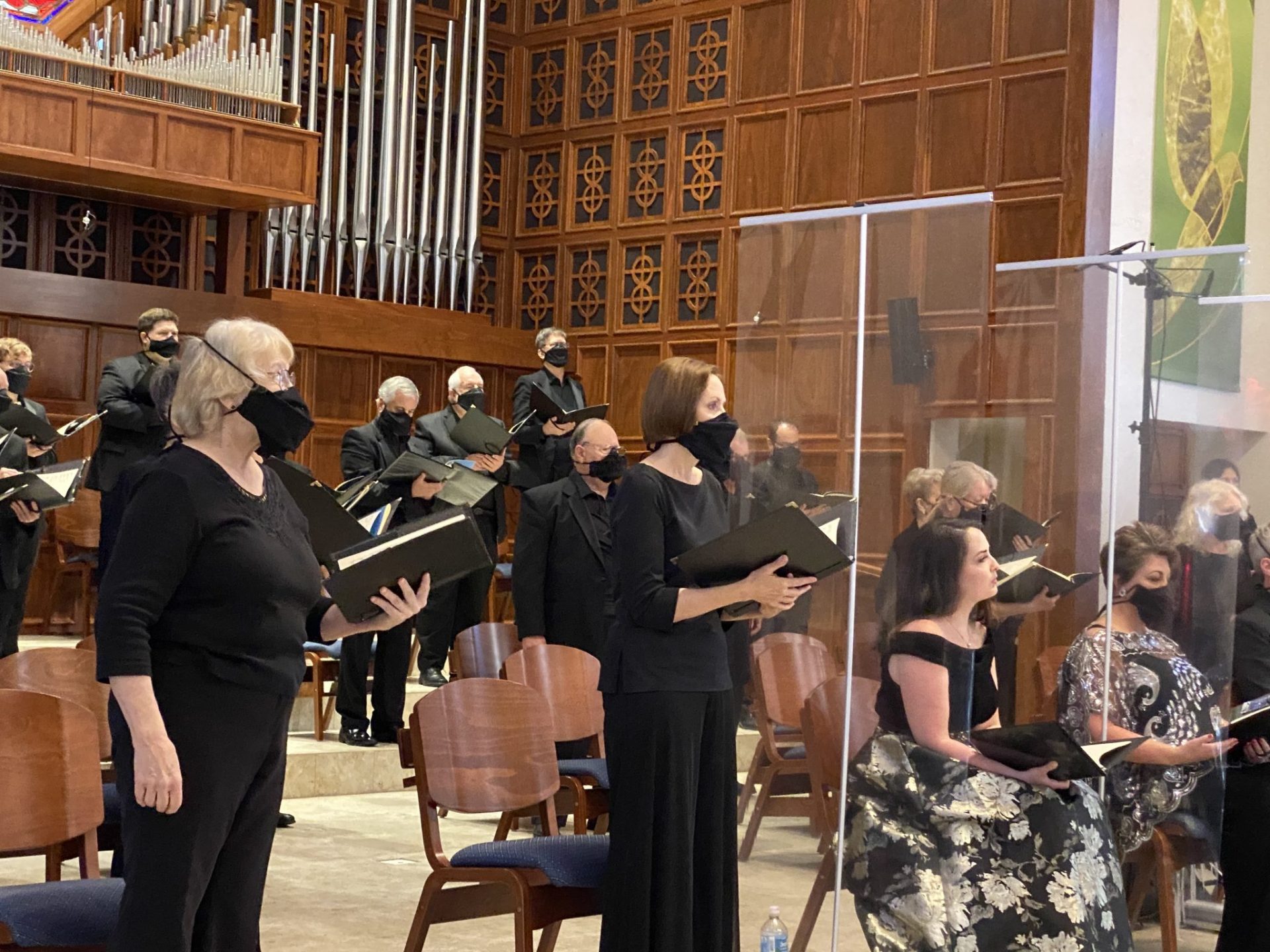 Even during the worst parts of the pandemic, the Key Chorale managed to continue “a full season of programming, sometimes without an audience, sometimes with,” says artistic director Joseph Caulkins. It was possible largely because the symphonic chorus is based in Sarasota, Florida. “The politics of the area allow you to do whatever you want, however you want, which is good, and terrible, and everything in between,” explains Caulkins. Through it all, he says the chorus has had very few issues with COVID, even before vaccinations were available. For safety protocols, “we always try to have multiple layers in place, whether it’s a mask or HEPA filters or social distancing.”

But with Omicron surging early in the new year, Caulkins says his choral community became very concerned. An ambitious performance of Thomas Tallis’s 40-part motet Spem in alium was in the works for January 14 and 15, and “we were still trying to get a sense of how bad this is going to be,” he says. “We didn’t have a lot of answers.” The Key Chorale had not canceled or postponed an event for more than a year, he notes, but amid all the uncertainty, rescheduling the Tallis concert seemed like the wise thing to do.

At the time, Caulkins says it felt like chorus decision-makers were in crisis mode. “We had to make a decision by the end of January 3,” he says. But looking back he has realized they hit on a “pretty sound” approach, one that they would go back to if a similar situation should arise again. He points to three main questions that they considered.

What are the numbers telling us?

As many choruses have done, the Key Chorale has formed a COVID task force. It meets every month, “and just kind of reviews everything,” Caulkins says. Assessing the threat of Omicron, they looked at infection rates on the national, state, and county levels, and “tried as best we could to see where the spike might end.” He says the data indicated Sarasota would be on the downside of the spike by late January or early February, about two weeks after the scheduled concerts.

If we go ahead, can we keep everyone involved feeling safe?

The task force also considered new protocols it might want to implement if the concert were to happen: adding testing, upgrading masks, adjusting physical distancing. Part of that discussion involved the protocols, capabilities, and current comfort level of the two venues where the concert was to take place, adds Caulkins. Perhaps the most significant factor, he says, was the safety of eight guest artists traveling to Sarasota from the Northeast. “Getting on a plane, flying, adds another whole layer of risk that some people are comfortable with, and most are not.”

At this stage of the pandemic, Caulkins says ticket sales are lagging only a little behind pre-COVID levels. But he notes that the Tallis program will be an expensive one for the chorale. In the midst of the Omicron surge, it was not hard for him to imagine the worst-case scenario: “If you’re moving forward, and the ticket sales are going to be particularly bad, you’re going to lose even more money.”

Decision-making at the Key Chorale is staff-centered, says Caulkins, so on January 3 right after the choice was made to postpone, communicating the plan to the board’s executive team became the immediate priority. Next in the hierarchy were event sponsors, the full board, and major donors. After that, e-blasts were sent to choir members and ticket holders for the two concerts. The next day, staff divided up a list of the ticket purchasers and emailed them to ask if they wanted refunds or exchanges.

Caulkins is confident now that postponing was the right decision. “We made it a good 12 days before the event, and there was a lot of second guessing in the two days that we spent wrestling with this,” he admits. But when he and his colleagues stacked the reasons to continue as planned up against the reasons not to, “they were just overwhelmingly against moving forward,” he says. Regarding the Omicron variant, “it turned out that our thoughts of what could happen were really pretty accurate,” he notes. During the week first scheduled for the concert, he says about 10 singers in the 110-member chorus were experiencing COVID symptoms or had tested positive. As a result of this decision-making experience, Caulkins senses “we’re getting better as an organization of trusting our intuition.”

He does have one notable regret. By the time the concert takes place May 6 and 7, many snowbirds will have headed back to their summer homes in the North. “A number of really wonderful season subscribers” will no longer be in Sarasota for the event, so for them Caulkins says the chorale is strongly considering plans to produce an online version.

With infection rates declining in Florida, the Key Chorale decided to proceed with plans for its next concerts, February 11 and 12. The chorus website lists the protocols that are in place:

Safety protocols may change due to:

Learning from an Unexpected Past, Planning for an Unpredictable Future

For the foreseeable future, Caulkins plans to keep looking at COVID positivity rates and case rates in the Sarasota area and Florida more broadly. The chorus will also keep close tabs on its singers, asking them to report in if they test positive. It’s a less scientific indicator, he admits, “but just knowing how many in our circle are testing positive in itself gives a little bit of context.” From the ten positive cases choristers reported in mid-January, the number had dropped to one or two a few weeks later, he says. Aiming to maintain a set of safety protocols that make his chorus comfortable, he is paying attention to what other organizations in the community are doing, especially churches, where he says many of his singers are involved. “We’ve been probably on the more conservative side,” he feels, “but not so much so that people would say, ‘Wow, they’re overdoing it.’” So far singers have willingly upgraded masks when they’ve been asked, but Caulkins worries that they’re reaching their limit. “We’ve got a lot of people that are good soldiers, but boy, are they ready to get those masks off. We as an organization haven’t yet figured out those parameters where we can sing maskless.”

“We’re anticipating there’s going to be more surges,” says Caulkins, and that argues for a go-slow approach. But the good news is that “we’re more prepared for it now than we have been. We have a little bit of a roadmap; we don’t have to create it from scratch.” Because of that, he feels more confident about achieving what he calls his overarching goal: “to deliver the season as it is, maybe changing protocols, but delivering the season.”